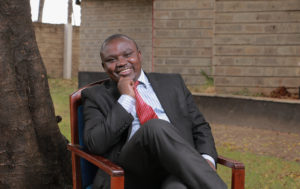 High school serves as an integral part of Rev. Evans Agoya’s life as that’s where he gave his life to Christ. He received the calling to full-time ministry while serving in the Outreach and Missions Department in Christ is The Answer Ministries-Valley Road.

In 2005, he joined the Nairobi Pentecostal Bible College and graduated with a Diploma in Theology and Biblical Studies in the year 2007. He proceeded to pursue a Bachelor of Arts (Bible and Theology) at the Pan Africa Christian University (PACU) where he graduated in 2010. In 2016 he graduated with a Master of Arts degree in Counseling Psychology at Daystar University.

Besides CITAM he has also served with other organizations such as Academy for Educational Development as a Counselor in 2010, in 2011 he moved to the Pan Africa Christian University (Valley Road Campus) as an Administrator. He served with Youths Against Immorality as a Peer Educator and Counselor from 2003-2005.

His desire is to see believers get equipped with the word of God and grow in their relationship with God. This desire drove him to serve God passionately in the Christian Education, Visitation and Counseling departments of CITAM Valley Road. For the congregation in CITAM- Buruburu he deeply longs to see serve God effectively using their gifts and talents, and ensure that they receive adequate care in their times of need.

His favorite scripture is drawn from Colossians 2:6-7 “So then just as you received Christ Jesus as Lord, continue to live in Him, rooted and built up in him, strengthened in the faith as you were taught, and overflowing with thankfulness”.

Rev. Evans Agoya serves in the Care and fellowship Department at CITAM Buruburu.